@jamestanton  raised the following (implicit) question on Twitter on September 8, 2017:

In the spirit of playing around and not thinking too hard, just computing to see what might be going on, I wrote a short piece of Mathematica® code that will run through the primes

So no more primes

To continue in this vein I just let Mathematica® keep on running through the primes greater than 7, stopping only if it finds a prime

I kept this running, with no positive result and aborted at which point I found

So by now I was thinking that maybe

is it for primes

If that is indeed the case, then it would be sort of nice to figure where in the non-square numbers 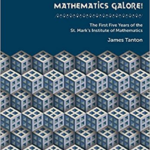 is the greatest integer

You can find this fact, for example, in Jim Tanton’s book Mathematics Galore!  in Chapter 4.

So the idea is to find an integer

Of course this root is NOT an integer, and again a bit of reflection tells us that we want the ceiling of this root, so we set

So now the idea is to prove that if

This would tell us that

, and gives us something concrete with which to work.